The United Kingdom is known around the world for its gold standard in education. Here we discuss the top 5 cities & universities to study in The UK.

Once in the UK as a student, you will quickly realize that there are certain cities that are more suited for education and student life than others to provide the best UK student experience. This can be due to a combination of several different factors, ranging from the quality of education, ease of finding good accommodation, number of students in the city, etc.

You should also be aware that universities and colleges charge a higher tuition fee for international students and you should compare them first to ensure you stick with your student budget to finance your study in The UK.

So, check this compact list of five of the best and most highly rated UK cities and universities when it comes to the quality of education and overall student satisfaction.

Oxford For Study in The UK

Oxford is a place that needs no introduction. It has been a mecca for education for the English-speaking world for centuries.

Known as a university city, Oxford is home to scores of different colleges that fall under the University of Oxford and other established educational institutions as well. The vibrant heart of the city is dominated by students and tourists and when here, you will find bookstores, a printing press, research laboratories, pubs, restaurants, libraries, and student accommodation in Oxford dotting the entire region.

Over the centuries, this UK city has molded itself around the student lifestyle and you will find 24,000 students living here from over 140 countries studying at the University of Oxford alone. Some will live in student halls in Oxford but also in private apartments, homes, and studios, depending on their student budget. 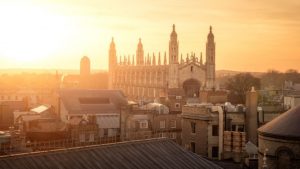 Just like Oxford, Cambridge is also primarily a university city and was established close to the heels of Oxford.

Here too, the student population of the University of Cambridge dominates the landscape, and you will also find several scholars who choose to settle in or around Cambridge to pursue their education further as it is also in closer proximity to London.

Here, you will find some of the world’s sharpest minds who excel at everything in many disciplines. Famous Cambridge Alumni are many royals like Prince William, Duke of Cambridge, scientists like Stephen Hawking, or famous personalities like David Attenborough.

The vibrant atmosphere in the city is due to the many student halls in Cambridge allowing the students to live close together, creating warm and lively communities.

Hundreds of student accommodations in Cambridge have propped up to support the local student population which makes it an excellent city in terms of quality of education, ease of living, and safety.

London – Best  City to Study in The UK

This bustling metropolis is the centre and capital of the UK and, in many terms, of Europe.

When it comes to UK education, London is one of the frontier cities where students come in the search of quality training and learning at renowned London universities.

London has more universities than any other region or city in the UK and is home to 40 world-renowned universities and colleges that attract around 400,000 students every year of which roughly 100,000 are international students according to Save the Student.

London not only offers education inside the institutions but also outside of it with fantastic museums and galleries such as King’s College’s Science Gallery. Students living in student accommodations in London learn every single day, about the different cultures of the world, about financial literacy, about art and so much more! The ease of finding London student halls and the large student population make it a popular choice as a city for education plus all the work opportunities. 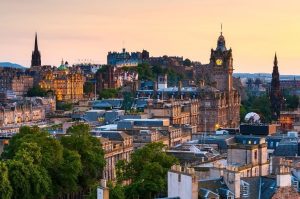 Edinburgh is not only Scotland’s but also the entire United Kingdom’s premier education city featuring top universities like the University of Edinburgh.

It is home to some very old and prestigious institutions for education that imparts unparalleled education to all the students coming into Edinburgh.

Since it is a metropolis, you will also find every kind of person living in Edinburgh, from grand local families living in old manors to young people living in student accommodation in Edinburgh.

When in Edinburgh as a student, you get the combination of both contemporary and historic which makes the lives of people living in student halls in Edinburgh even more enriching.

Manchester is known all over the world for football, but British citizens also know it for its excellent education featuring the popular University of Manchester.

It is an educational hub that attracts not only local but also international students because of its reputation for a vibrant and modern student city. Since the city has a large population of first and second-generation immigrants, international students feel less of a culture shock and the chances of running into someone from your particular country or region are so much higher, just like in London.

Finding student accommodation in Manchester in the form of student halls Manchester or private studios, etc. is also much easier here making it an excellent city for education.

When it comes to the best education in the UK, the options are practically inexhaustible, and comparing them before you make a choice is key before you start working towards your goal in order to get into the university of your dreams!